The purpose of this test is to check the actuation voltage controlling the carbon canister purge control valve’s operation.

The canister is operated by the Engine Control Module (ECM) using switched earth Pulse Width Modulation (PWM). There will be supply voltage at both terminals until the solenoid begins to operate. 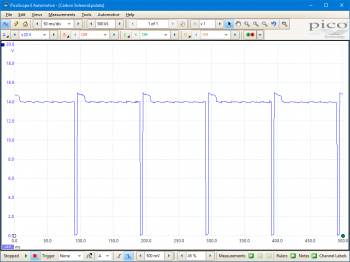 Go to the drop-down menu bar at the lower left corner of the Waveform Library window and select Carbon canister purge solenoid voltage. 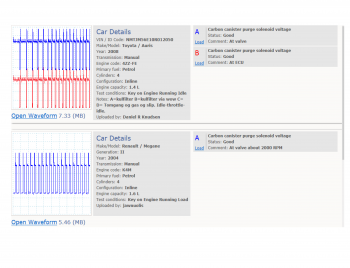 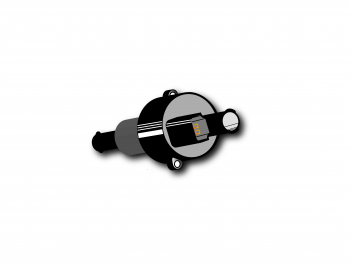 The carbon canister is a container filled with fuel vapor absorbent carbon granules. It stores harmful evaporative emissions until they can be delivered to the intake manifold for combustion by the engine.

The carbon canister’s inlet is connected to the fuel tank and its outlet is connected via a purge control valve to the intake manifold. The canister volume will also have a fresh air inlet via a one-way (or solenoid-controlled) vent valve.

Fuel vapors are purged from the canister when a vacuum is present on its outlet. Therefore, canister purging occurs when the intake manifold pressure is below atmospheric pressure, such as when the engine is idling.

The flow of vapor from the canister to the intake manifold is regulated by the ECM-controlled purge control valve. Generally, the valve is mounted within the engine compartment, although it can be mounted directly on the canister.

Typically, the purge control valve is a normally closed solenoid valve. It requires a circuit current to act to open the valve, whilst it works against a closing spring. The solenoid valve will have an ignition feed on one side and an ECM controlled switched-earth PWM voltage on the other. Therefore, the ECM can vary the solenoid circuit current and the degree of opening of the valve.

The ECM uses the exhaust oxygen sensor to monitor the enrichment of the mixture when the purge valve is opened. As such, fuel vapors will not be purged from the carbon canister until the engine is warm and lambda control is functioning.

The system allows fuel vapors to be burned when they are least likely to have an adverse effect on performance or emissions. The purge control valve opening protocols are pre-programmed into the ECM and will vary across manufacturers and applications.