The purpose of the test is to check Controller Area Network (CAN) bus communications when they could be subject to Electromagnetic Interference (EMI) from high frequency, quickly switching, systems and components. The test uses a Math channel to confirm that the differential signal between the CAN High (CAN-H) and Low (CAN-L) lines is maintained whilst the EMI is present. 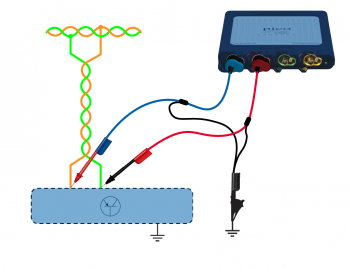 CAN messages are transmitted digitally as a series of low or high values within a fixed structure known as a frame. The smallest data unit within these binary encoded messages is a bit, logically representing either 0 or 1. A message identifier follows the start of the frame. The identifier assists message arbitration when two or more control units try to broadcast a message at the same time; the lower the identifier's value, the higher the message's priority. Various values, including the data payload, and a checksum follow the identifier.

The voltage difference between the CAN-L and CAN-H lines represents the bus's logical state. Therefore, the lines are referenced to each other rather than to an external potential, such as the chassis ground. This differential arrangement improves noise rejection as interference affects the lines equally and their voltage difference is maintained. Typically, the lines are configured as twisted pairs to reduce interference effects.

High speed CAN buses use terminating resistors to remove transmission reflections within the bus; without the resistors, transmissions can bounce back from the end points and distort the messages. Typically, a 120 ohm resistor is used to connect the CAN-L and CAN-H lines within the two control units at each end of the bus. In this parallel configuration, the total resistance between the CAN-L and CAN-H lines is around 60 ohms. Therefore, measurement of this resistance will indicate the bus's integrity. Resistance measurements must not be performed on buses without termination resistors, unless all the attached control units have been previously disconnected.