The purpose of this test is to evaluate the operation of the Bosch Common Rail Diesel (CRD) Pressure Regulator Valve (PRV) based on the voltage and duty control under engine run conditions. 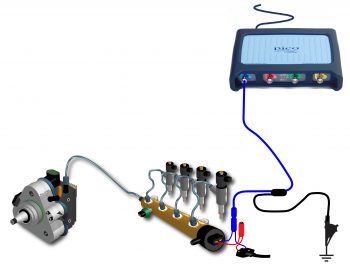 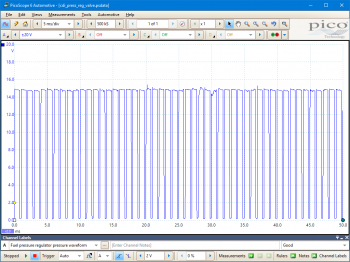 Go to the drop-down menu bar at the lower left corner of the Waveform Library window and select Fuel pressure regulator pressure waveform. 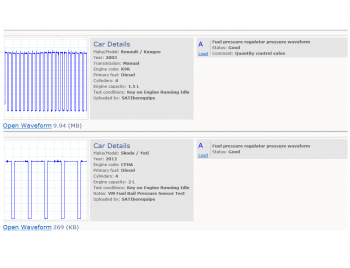 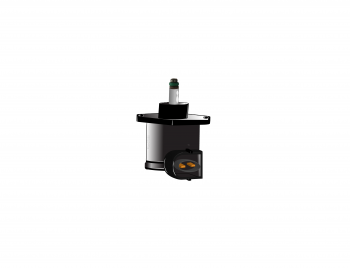 Within a common rail diesel system, the Engine Control Module (ECM) uses a pressure regulator valve to control the fuel pressure within the common rail. When the ECM needs to reduce the pressure, the valve is opened and excess fuel is released to the fuel return system. Conversely, when an increased pressure is needed, the valve is closed.

The pressure regulator valve position is determined by the action of a solenoid against a spring. With these devices, the valve will move from its default position, open or closed depending on the application, when current flows through the solenoid. The greater the current, the greater the displacement of the valve. Thus, in some systems an increase in current will cause the valve to become more open, whereas in others it will cause the valve to become more closed.

With a switched earth activated circuit the solenoid is fed with a constant battery positive on one side and, on the other side the ECM modulates the path to the earth creating current flow. Therefore, the valve is energised on, when the actuation signal is at battery negative voltage and de-energised off, when the actuation signal is at battery positive voltage. Hence the greater the duty cycle, the greater the current in the circuit and the displacement of the valve from its default position.

The ECM will vary the duty depending on the engine speed, load and temperature conditions and the torque demand from the driver, accelerator pedal position.