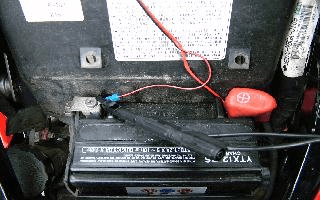 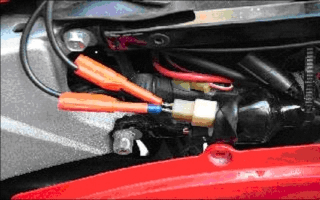 Connect BNC test lead into Channel A and Channel B of the scope and then connect a small black clip to one the negative ends (black moulded connector). Stack the second BNC cable on to the first. Place the black clip on to the battery negative, as shown in Figure 1.

On the positive cable ends (red moulded connectors), connect a Back-pinning Probe. Locate the voltage regulator multiplug and back-probe two of the three phase wires. In our example, the regulator is mounted on the seat frame and the phase wires are all coloured yellow. Connect as Figure 2. 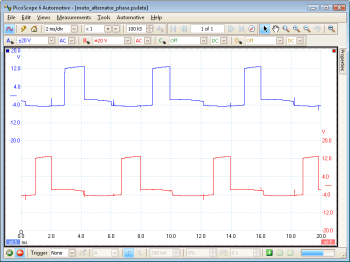 The example waveform illustrates the three phases before rectification. Each of the three phases can be seen switching between -4 volts and +12 volts giving a peak to peak voltage of 16 volts.

Connect the oscilloscope to the other phase to observe the other output voltage.

The alternator's three phases are wound at 120 intervals, enabling it to produce a high enough current output while still retaining a compact size. The picture shows the phases before rectification, where the alternating current (AC) is converted through a series of diodes into the direct current (DC) required to charge the battery.

With a four-channel scope, it is possible to use a third channel for the third phase, allowing all three phases to be viewed at the same time. 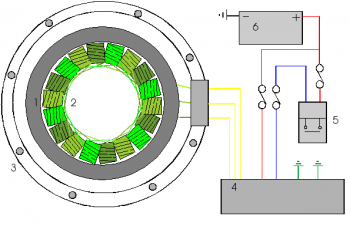 Ensure that the three phases are present and that they all have similar amplitudes.
If one of the phases is missing, it may have an open circuit that can be tested for continuity using a multimeter.