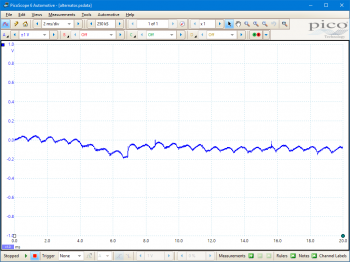 Go to the drop-down menu bar at the lower left corner of the Waveform Library window and select Alternator AC ripple / Diode Test.

When the engine is running, an alternator generates electrical energy to supply the vehicle’s on-board electrical systems and replace the battery charge consumed during cranking.

The alternator output will vary with engine speed and electrical load. However, a consistent ripple must be maintained throughout these variations.

Turning on electrical consumers and increasing the engine speed will increase the alternator load which can provoke faults that are not evident at low loads. If the peak to peak output voltages are above 500 mV, the offending voltage spikes may disrupt other electrical systems, in particular those systems dependent on an AC signal.